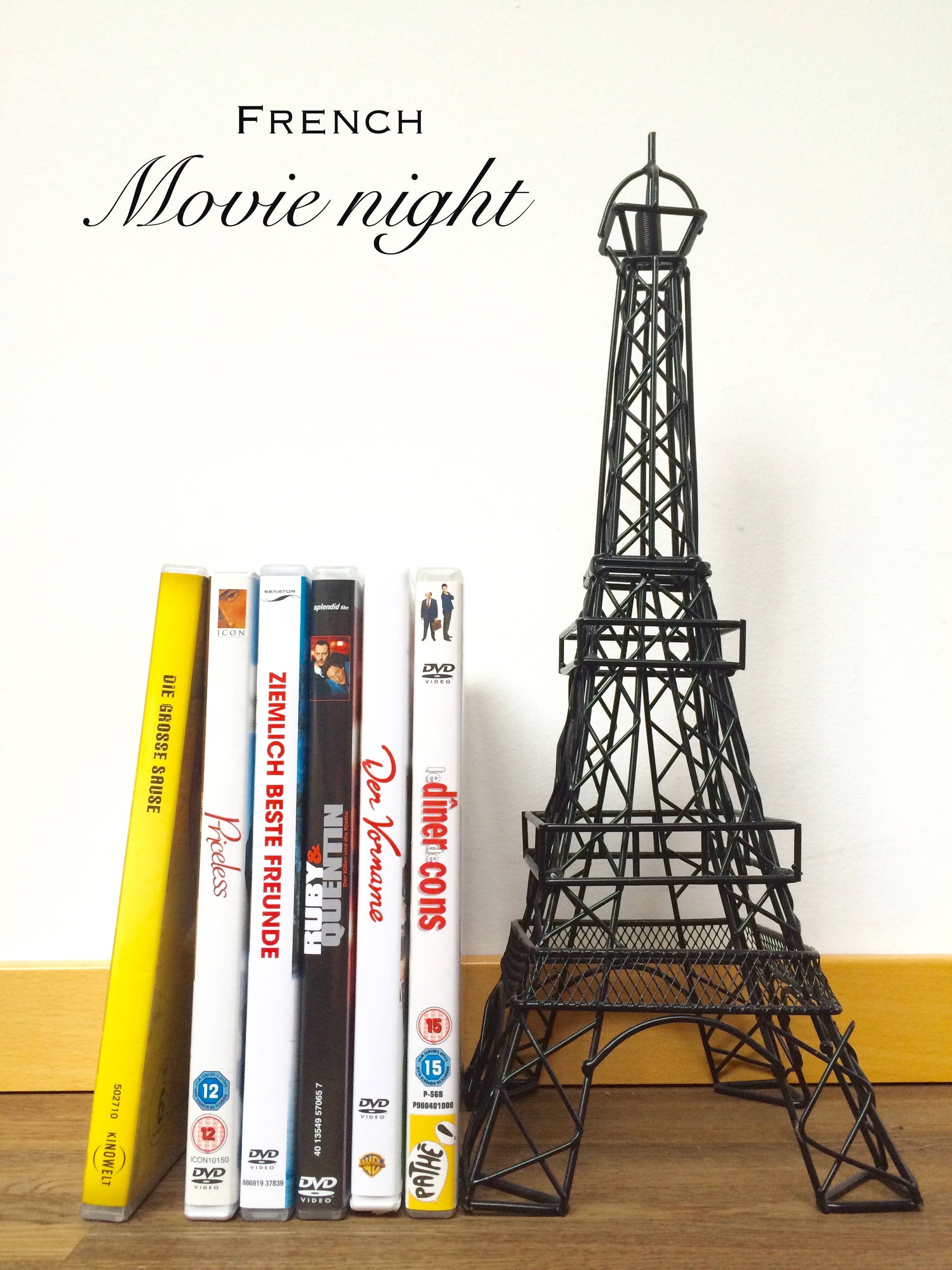 As you know, I have a slight obsession with basically everything French. And French movies make no exception. As soon as a new one is out I have to go to the movies and watch it. Good thing they are usually screened in one of those fine arthouse movie theaters that let you have a glass of chilled white wine with your film. No surprise I also call myself the proud owner of a whole collection of French movies. Of all of them I picked six for you which no matter how many times I’ve seen them, I simply can’t resist the urge to watch them over and over again because they have this certain – “je ne sais quoi”.

La Grande Vadrouille (Don’t Look Now… We’re Being Shot At!)
A total classic and the first French movie I’ve ever watched – and since then uncountable times. When I was a kid I just *loved* Louis de Funès, this iconic French comedy superstar – hyperactive, self-important, stubborn and unsympathetic. In this film, he plays Stanislas Lefort, a grumbling and cocky conductor of the Opéra Nationale de Paris, who – together with  Augustin Bouvet, a house painter – helps the crew of a Royal Air Force bomber shot down over Paris escape the German-occupied France during World War II. Louis de Funès at his very best. You’re missing out big time have you not watched this one already.

Hors de Prix (Priceless)
I first watched this movie with my flatmate in New York and we just couldn’t stop laughing about all the hilarious scenes (that is the elevator…) and adoring Audrey Tautou’s to-die-for wardrobe. Audrey Tautou plays Irène, a beautiful, scheming opportunist who takes Jean (Gad Elmaleh), a shy young bartender, by mistake for a millionaire. When Irène discovers his true identity, she abandons him immediately. But Jean, completely love-struck, can’t let her get away. In the attempt to gain her affections, he sets himself up as a gigolo at a luxury hotel – and hence as the male counterpart of Irène. Shot in the beautiful South of France, this comedy is sexy, hilarious and romantic, all together.

Intouchables (Untouchable)
I probably don’t have to say much about this movie, because: who hasn’t watched it? This true story about an immigrant from Senegal living in the banlieues of Paris who takes care of a rich quadriplegic is so heartwarming, so rich in humour and esprit that I never get tired of watching this movie. My favourite scene? When Driss accompanies Philippe to the opera and cannot stop laughing when he discovers a tree singing on stage.

Ruby & Quentin
When I watched this film for the first time, I laughed so hard I was crying. Don’t expect anything superior, really, but this is French humour at its very best. Two convicts who couldn’t be more different escape from prison: Ruby (Jean Reno), the proper criminal, a hard man, strong, silent, and Quentin (Gérard Depardieu), the idiotic crook, so endearing, but absolutely nerve-shattering, with only one dream: to open a coffee-house with Ruby.

Le Prénom (What’s in a Name?)
The ultimate French cinematic comedy! A small dinner party at a Parisian apartment. A cast of characters who definitely know how to turn a phrase or two. Great dialogues, brilliant humour, intense, clever, neurotic. Highly recommended!

Le Dîner de Cons (The Dinner Game)
Every Wednesday Pierre and his friends have an “idiot’s dinner”, when they invite an idiot to share their meal. Whoever invites the biggest idiot wins. When Pierre meets François Pignon, he is convinced he has found the biggest idiot ever. But with the invitation of François, Pierre’s life starts to fall apart. Hilarious!