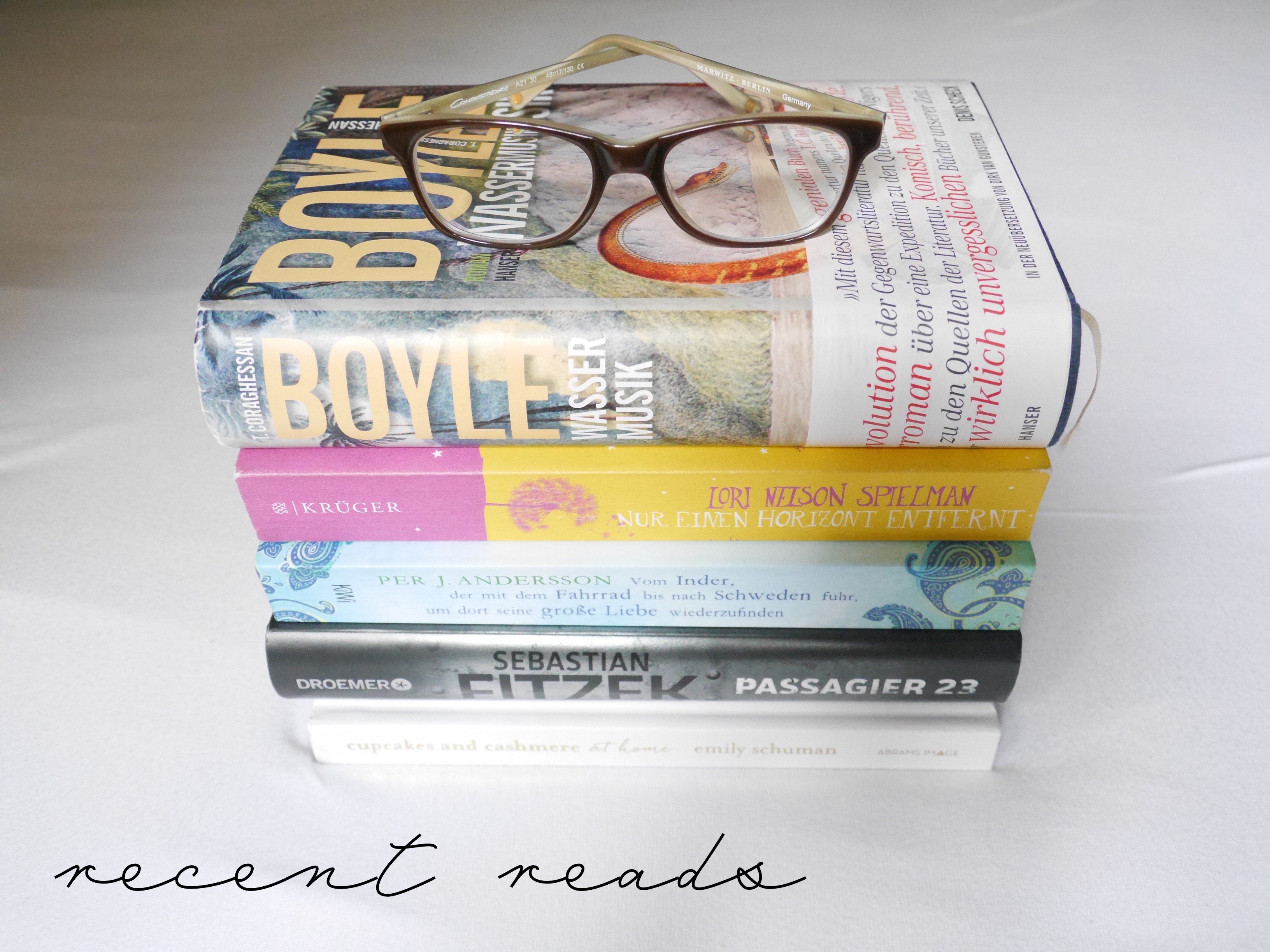 I’ve been reading like a maniac lately. There are just too many good books out there, and seriously: is there anything more relaxing and refreshing than to snuggle up on the couch, embrace the silence, and get engrossed in a good story? Reading is also perfect to have a night away from the buzzing online world. Bliss! Here’s my latest staple of books I’ve read:

T.C. Boyle, Water Music (Wassermusik)
Usually, I’m not that much into historic novels, but this one is so highly entertaining, thrilling and funny, written in the most beautifully colourful language, that I couldn’t put it away anymore. The story is set in the late eighteenth century and describes the (true) adventures of Mungo Park, Scottish explorer of the river Niger, and the (fictive) life of ill-starred petty criminal Ned Rise. Pure entertainment!

(still only available in Swedish, German, French and Danish – but expect the English translation to be out soon!)

Lori Nelson Spielman, Sweet Forgiveness (Nur einen Horizont entfernt)
After having read Lori Nelson Spielman’s first book “The Life List” (Morgen kommt ein neuer Himmel) – which is one of the most beautiful books ever – I was jumping right at it, full of high anticipation, when a friend of mine brought me this novel for my holiday. But I have to admit, Sweet Forgiveness fell a *bit* shy of my expectations. The story is about Hannah Farr, the star of a New Orleans talk show who receives Forgiveness Stones from a former classmate who bullied her, with a chain letter and two simple requests: to forgive, and then to seek forgiveness. From there on, the story takes its course, nothing is like it was before in Hannah’s life. The book is again a very enjoyable read, beautifully written, and full of heart, power, and wit, but especially the end was, like in the Life List, and according to my taste, a bit too sweet, simple and tacky.

Sebastian Fitzek, Passagier 23
If one book deserves to be part of the “thriller genre”, then it’s this one: seriously the most thrilling and chilling book I’ve ever read. Apparently, it’s a well-known (and true) fact that each year, around 20 cruise ship passengers go missing. Those missing people are called “passengers 23”. In this book, one of those passengers 23 – a little girl – re-emerges, and together with her, a dark secret. Passagier 23 is one of those thrillers that draws you in while twisting the story over and over so that you can never see where it is going. It keeps you hooked until the very end. I literally couldn’t give this book out of my hands and wasn’t approachable for two full days – which apparently was a tad annoying for my environment… Just saying: I warned you!

(sorry again, my English readers, still only available in German, but expect the English translation to be out soon!)

Emily Schuman, Cupcakes and Cashmere at Home
The California based blogger Emiliy Schuman’s second book on lifestyle advice with a focus on interior design and entertaining at home, including DIY design projects and party planning ideas. Beautiful and appealing pictures and very inspiring!